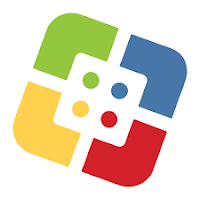 MSAD 6 Tech Coaches created an iPad App guide for the 2017-2018 school year using Bloom's Digital Taxonomy. (View the guide at the end of this article.) These approved apps, along with a few other Apps, will be in the Self Service App for students to install on their individual iPads. The Self Service App icon is displayed to the right of this text. Please contact your tech coach to learn how these fabulous Apps can help increase engagement in the classroom.

Three Apps to make sure to use, since we paid for them, are: 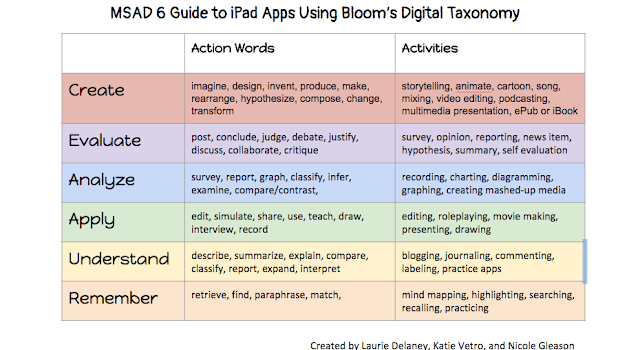 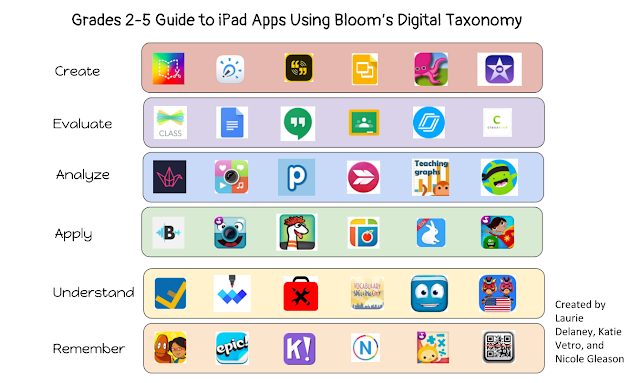 Posted by Nicole Gleaon at 6:30 AM

Why can't my cell phone connect to the network?

As we start the new school year, it is probably a good time to talk about cell phone use during school. Some may find that their phone (or other personal devices) won’t connect to the SAD 6 wireless network and they wonder why. In most cases it is because that device has been blocked.

The SAD 6 Board of Directors has approved several policies relating to the use of personal electronic devices by both staff members and by students. You can find them on the district website. The primary purpose of these policies is to ensure that the district technology, including the network, is used “to support the educational mission of the schools”. In addition, the law requires that the district shield students from sites which promote violence, obscenity, or other subjects which may be harmful to minors.

The Technology Department is tasked to insure that all users and devices comply with the district policies. On a typical school day, the district has over 5000 devices (laptops, iPads, printers, telephones) using the network, and there may be another 1-2,000 personal devices. In order to fulfill these requirements, the district uses a device commonly referred to as a “firewall”. Not only does this specialized computer provide the ability to restrict access to specific sites or applications, it also protects the district network and devices from intrusions, viruses, malware, and other threats from outside our network. The firewall employs a list of websites and applications to filter from our network, such as Facebook, Tumblr, Minecraft, Skype, etc. The firewall also tracks all incoming and outgoing network traffic and generates reports to identify the most accessed (or blocked) sites, the devices using the most bandwidth, any outside threats, etc.

So how does this relate to your cell phone being blocked? Here are some simple rules that we use to single out a device from using the district network:


Some might argue that there a very good educational uses for some of the sites that are blocked and they are correct. For example, Mr. Taylor at BEHS uses Skype to communicate with an inventor in Europe. Students can learn a lot from that kind of activity. However, when there are 1,200 Skype sessions going on at one time, most of them are students Skype’ing with each other and that is not an educational use. Because of that, Skype is blocked at BEHS and BEMS.

In summary, all staff and students should be familiar with the District policies regarding the use of personal electronic devices. The wireless network and the Internet access are provided to facilitate the educational mission of MSAD 6. If personal devices are seen as interfering with that mission, they may be blocked from future access to that network. At no time does it prevent you from using your device, it will just have to be via your cell carrier, and not the MSAD 6 network.

In this blog you will learn about Chrome devices. This article is intended for anyone new to using a Chrome device (Ed Techs, Food Service, Custodians, Bus Drivers.) Follow this link to my Blog on Google Drive to learn some basics about your new device:

BE Proud! Reflections from a Tech Coach

For most educators, August is the ideal time for reflection and preparation. By now we've checked off most of the experiences on our summer bucket lists, and we're ready to dive back in to make this the best school year yet. As a technology coach, I have been given an amazing opportunity to serve my district by offering support to the K-5 staff at Hollis Elementary and H.B. Emery Jr. Memorial School. One of my biggest fears in accepting this position last summer was that I would lose the special community bonds that I had created by working with Buxton students, their families, and my colleagues as a second grade teacher. In my new role in unfamiliar schools, I still managed to build meaningful relationships with students, which of course I scientifically measure by the fact that I was noticed and warmly greeted by students in a public place, and with colleagues who eagerly invited me into their rooms to guide them with their technology goals. Surprisingly, missing out on working with one consistent group of students didn't feel like the tragic loss that I thought it would. Traveling between schools and in the K-5 classrooms allowed me a view that I have never had before. I got to see the strategic flow of lessons from grade-to-grade and the amazing instructional practices that our teachers are working so hard to implement. I worked closely with the technology department and my fellow technology coaches to bring our staff and students meaningful learning experiences. I also expanded my community connections by meeting with other tech coaches and teachers across the state and, thanks to Twitter, across the globe! This new perspective provided me with a much stronger sense of pride for Bonny Eagle. Our staff's dedication to providing all students with the best learning experiences is astounding. The incredible access that we have to technology resources and the experiences that we're creating for students is life changing. I'm optimistic and prepared to take on the new challenges that this school year brings! I'm really looking forward to working with staff at our Bonny Eagle Tech Camp that'll be happening on August 10th, 11th, 14th, and 15th. In the meantime, keep making Bonny Eagle proud! Our students deserve every ounce of planning and preparation that you can give.
Posted by MSAD 6 Technology Department at 10:53 PM