Improved method of download and re-uploading files in Drive

Google has improved the way users can download and re-upload files to Drive without having duplicate documents as a result. 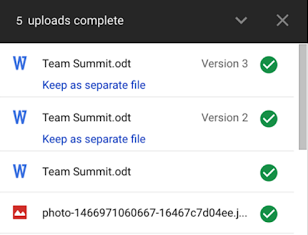 Called deduplication, when a user uploads a file that has the same name as an existing file, the file will be deduplicated, and the former version will be stored in revision history. Users will then be able to go back in the revision history to revert back to a previous version if necessary. This will also work with folders. If a folder with the same name as one being uploaded already exists, it will be merged with the existing folder.If you do not wish for deduplication to happen, once the file has been uploaded, click on "Keep as separate file", which appears in the upload screen below the file name uploaded.﻿

Posted by MSAD 6 Technology Department at 11:35 AM